And on sale in the Japanese Switch store, about £4 each

Trying to avoid building up much of a backlog on 1P stuff, pretty tempted though.

Had to follow guides for my last five shrines in BOTW. Didn't want to but figured a pre-internet me wouldn't have minded. Turned out they were all hidden quest types, some with multi layered triggers. Would've been pure luck or wretched doggedness to find them.

I'm nowhere near that complete .... Have been lost wondering about for ages now..only have 2 device beasts completed as well...

I also have 2 shrines that I couldn't figure out with .

Astro duel deluxe . i've gone from thinking meh to loving it , great like multiplayer game and a good blast ! simple yet effective

Actually got to play local tabletop multiplayer Switch. It was with a 7 year old who had never held a controller before, but still - kept us entertained for half an hour.

Even kicked my **** on Green Hill Zone 1 due to her being far more practiced from the iPhone ver of Sonic 1...

I bought voez , touch screen on the switch is great and is a decent game..... Although it has some cheesy songs stuck in my head now

Anyone get this month's Super Play? 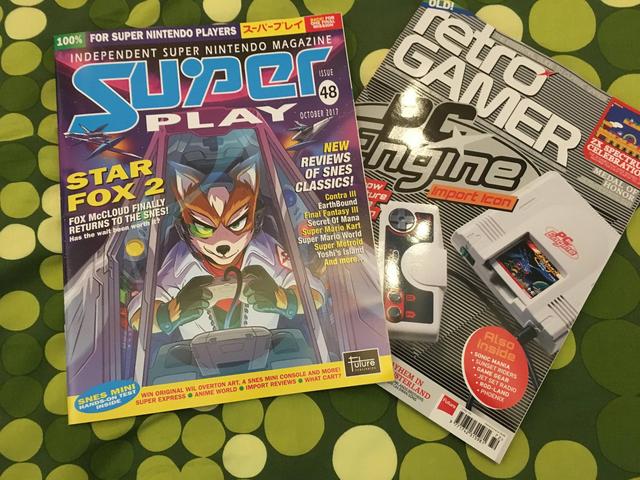 - -
Looking to get a replacement foot panel for my Minicute.
If anyone sees one, let me know!
- -

cools wrote:Unpopular opinion, I don't mind the HD SF2 artwork. The backgrounds are nice, the HD UI is fine, and the sprites whilst not being a patch on the originals do the job well enough provided you don't focus on how bad the faces are. Classic art works fine on TV but looks awful on handheld, think the UI elements in HD mixed with low res game is a bit too obvious on a small screen.

The remixed music I can't stand. New graphics, classic music, game is fine with me on handheld and TV.

JoyCon are passable via stick. Dpad buttons are a no go. 8bitdo NES30 / Pro have a decent dpad and I'm having no problem pulling off a shoryuken for a change.

Although I've been told Ryu's sample for this sounds more like "vote UKIP"...

I've just picked this up this weekend .I agree with cools the hd is ok ,classic isn't great in handheld mode i didn't try it on the TV ,. New music sound is woefully. So sticking with classic .at the end of the day it SF so nice to have.

It's hard to knock it, it's another mag bundled in with Retro Gamer, whilst it's a little on the light side it's just a special version focusing on the games with the Snes Mini. I guess if I was (any more) cynical, I would say that its a promo brochure for the Snes mini.

To be honest the Retro Gamer feature on the PC Engine - which is what I bought the mag for, was just about the background of the coverage of the PC Engine in the UK - some nice stories of how the word got put out there initially and a focus on some initial games and the CD add on, but then didn't really go into anything at all about the progression of the console in Japan (Duo, SGfX, GT, LT game library etc), and although they mentioned how the Card add ons beefed up the capabilities and mentioned the Arcade card, it was nothing like the in-depth overview that I was expecting.

They should have really called it 'PC Engine - we talk to a few people that hyped the console up in the UK'.
- -
Looking to get a replacement foot panel for my Minicute.
If anyone sees one, let me know!
- -

Who opened up the floodgates on Switch games? It's changed from having enough to keep me interested to an overwhelming release schedule with so many things I want to play.

I got the SFC30 (non-PRO), and pad hacked it. This was before the Hori fight stick was available. It's a lower cost alternative if you DIY, and works great.
Top

pity its not around the 30 mark , id get it then. im not sure what controller to get next

cools wrote:Who opened up the floodgates on Switch games? It's changed from having enough to keep me interested to an overwhelming release schedule with so many things I want to play.

and quiet a few games i want /need to buy and still havent got mk8d or splatoon2 either . Also a load of games are out this week

I am only missing the yellow controllers.

Annoyingly my red/red and blue/blue are different shades.

Snes Mini's great. We all know the alternatives but as a package it's superb. I love the convenience, the snes pads and the UI is more fun than anything unofficial. It's worth having just to run in attract mode - which is what it's doing now, along with ST in the cab, while I derp about on my phone.

Nice to see the CRT filter's less severe than the NES classic, though I prefer 4:3 which has also been vastly improved.
Top
Post Reply
2804 posts