Out now and reviewing well.
Top

Lol what a world
Top

Everyone's fat.
The music is bad.
If it didn't have the SOR badge you'd think it was based of a Nickelodeon series or something.
HOWEVER, gameplay seems really tight. They've not gone mad and tried to reinvent the wheel. The new tweaks work really well.
Top

New tweaks? They completely ignored the improvements in SoR3, kept the worst part of the enemies and turned the gameplay into a juggle-fest. Which would be fine if they didn't slap a SoR title on it. I'd say its clearly made by French. And that's even ignoring the horrible art and music.
Top

It's on GamePass for xbox people
Top

I got the Switch version today and have only played it for 15 mins today but first impressions are positive.

The gameplay’s solid and fun and I’m looking forward to playing it some more.

Same team as WB3, which is excellent. Switch version, with a modded Hori Mini stick as it was the cheapest/easiest solution a while back when I wanted to play Cuphead.

Trying to go into it with an open mind, as I really like side scrolling brawlers. Only managed 20 mins thus far, but enjoyed it. I'm looking forward to some of the unlockables that have been mentioned.
I Got PAID...
ウィッグスプリッター - スーパーガレージゲームセンター。
Top

Make sure you read the fighting tips in the pause menu if you haven't already.

I think it's great. The gameplay seems really well thought out, you could even say they've actually fixed some long standing problems with the genre. Having a separate button for picking things up so you don't waste food by accident, enemies can't be knocked offscreen (meaning some great combo opportunities), you can refill the energy lost by using a super move if you quickly inflict more damage etc. Earning extra lives by scoring points from combos is neat too. Being able to throw pipes at enemies then catch them as they bounce back is a laugh. The characters are nicely varied and there are a decent number of levels. The only thing I dislike is the music tbh.

Had a lot of fun with it last night playing co-op with my partner. I think it plays great. It's definitely more juggly than most (particularly old) brawlers, but it's an improvement IMO. SoR1-3 wasn't better for specifically not having it, and the mechanic seems well thought-out and blends nicely with the existing SoR-y gameplay.

I am let down by the soundtrack though, and I feel they pulled a bait-and-switch on us a bit before release. I was under the impression that the entire soundtrack was going to be done by Koshiro, Kawashima and guests, but the majority of it is by some guy I've never heard of and it's hugely disappointing so far.
Top

Local or remote? I tried multiplayer on steam for like half an hour. Most matches wouldn't connect and the few that did were unplayable. I've refunded since so i can't retry it.
Top

arcnl wrote: ↑
May 4th, 2020, 2:47 pm
Local or remote? I tried multiplayer on steam for like half an hour. Most matches wouldn't connect and the few that did were unplayable. I've refunded since so i can't retry it. 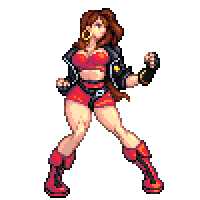 It was less unbearable with the retro filter (not crt) but that also looked kinda misplaced. Good thing they added the retro music pack too, the new music was pretty lame. Yuzo Koshiro's tracks weren't much better than the rest of the lot here i think.
If i can mention something positive though, i did test it out on the old crappy livingroom streamingrig that's officially way below minimum supported specs (second-gen i5 with integrated graphics and almost nonexistant vram), and it actually ran great with everything completely scaled down. There's plenty of stuff that will do a lot worse.
Top

Anyone lucky enough to get the Physical collectors edition? It’s too bad LRG is so expensive with shipping abroad. I'm digging the game. I think the improvements are a nice progression of the genre, and there are clearly versus fighting game influences here that I feel play well with the style of game.
The replayability seems pretty good with something like 16 unlockable characters all feeling very different from one another. I like that there's an Arcade mode and Battle mode as well.

The new character Cherry seems cool, but I haven't really figured out maximizing her combo damage yet. Her start-up frames on her specials are all very sluggish to me, so I gotta re-learn how to play the game with her.

Things I really like about the game:
- Everyone's fat.

I like how people look thicc, and buff enough to take on 1000's of enemies in a nonstop fight. LOL
- Screen-edge wall bounce instead of passing through the edge of the screen into the unseen. This is definitely a versus fighter mechanic they threw in here to help boost combo juggles and keep the action on screen rather than throwing attacks off-camera.
- Animations are fluid, feel viseral on throws and slams.
- I like the artstyle, some don't, different strokes for different folks. The comic influence appeals to me, and the posing of the characters are more dynamic looking than the predecessor games.
- Dedicated pick-up button. At first i thought it was awkward, but as soon as i got used to it, it was clear that the designers chose this to combat the "pick-up instead of attacking" issue when you're fighting enemies near food.
- Throwing and catching weapons. There are some great moments you can have by throwing and catching your weapon in the middle of racking up combo attacks or grabbing and slamming enemies.
- Using specials highlights potential health that you could lose if you don't keep your attacks up. This is a nice gambling mechanic that promotes more offensive play, rather than using the "get-off me" specials as a defensive technique and thus costing health automatically.

Things that annoy me:
- The first half-dozen or so of unlockable characters are all the retro versions of the current line-up. I would've mixed it up with characters you haven't been able to play as before, like Shiva or Ester.
- Picking up food while holding a weapon is super finicky. You need to be directly center on top of food to pick it up while holding a weapon, otherwise you just throw your weapon.
- hit boxes for the knife dudes suck. There's hit collision behind them on their backs! wtf.
- enemies have wake-up attacks, yet you don't.
- bosses break your invincibility frames on specials. Which I understand why they do it, I just think it's annoying they could.
- Only a few songs in the soundtrack are good, the rest kinda grain on my ears. And the whole soundtrack is forgettable, unlike SoR2 or SoR3.
- The game seems a bit too easy on Normal and Hard. Hardest felt good for a challenge, but i had to sift through the previous difficulties to know that.
- Customizing the food's visuals is nice, I just wish it was mixed up, not like all large food is this one type, all light food is that one type.
- Boss fights are inconsistent in difficulty. Some are way harder than others.
- Anticlimatic ending. C'mon, I want that "Hans Gruber slo-mo falling from a tall building ending", something that shows your nemesis' reaction that they have been bested and failed. Not --beat the end boss --> roll credits.

Overall I like the game, and some of the cons i mentioned could be easily patched out. Some blaring ones like the crap music obviously can't. But for me, the game is worth the price. I bought it on Switch, got the 10% release discount off , then used my Nintendo points to get another $3 off. So at the end of the day, $19 is what i paid and I've already got my value out of it.
The Artcade blog
Top

I've never understood limited physical game releases nowadays, it made sense when the system wasn't a complex machine that could lock out your disc any time they wanted. Bit different with a SNES cart.

Also, who is buying optical media and expecting to a) play it still in 20yrs, or b) want to, c) have a working machine it'll run on