I'm late to the party, but this comment made coffee come out of my nose.

I love this image so much as well, the guy on the right is mag-dumping from both his M16 and the M203 grenade launcher while pulling that face.
Top 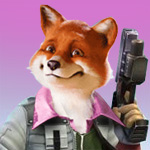