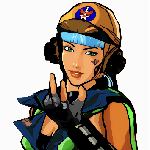 I'm joining all sorts of arcade forums as i've just gotten a SEGA Naomi Universal Cab and am looking for some parts for it.
Also to see awesome cabs by other forum members and chat about games and such!!

Great stuff! Welcome and get involved

very happy to be here.
I'm Cedric akka Amobile, 44 Years old, i'm living in Chambéry in the South East of France.
I'm collecting old consoles systems since beginning of 2000's and now i think i have near all the games i would like to process on the consoles systems.
So i started to buy some arcades cab (Rit legno, A virtua Fighter to restore, and an old jeutel).
I installed first a PC in it, then a raspberry Pi 3 with the Rpi2Jamma interface to play at the 80's/90's 2D Arcade Games. (Mister solution is too expensive at this time)
But now, i would like to find some games i knew in the 90's like Street Fighter, Final Fight, Asterix or Alien vs Predator (or the dedicated T2 arcade cab !!) .
I consider myself as a beginner in the Arcade domain, so i'm very pleased to be here to learn

Fairly new to arcade collecting but been a gamer all my life.

I have a ton of questions and I look forward to all your help.