I see what you did there... All invoices now sent out via MP!

If you were expecting an invoice and haven't received one, or have one received one and it's wrong, let me know asap, tiny errors do occasionally creep in!

Anybody wishing to join the group order at the last minute can still do so, just post in the thread with what you want to order and I will then send you an invoice via MP (having email notification of private messages turned on is useful, user control panel > board preferences > edit notification options). Payment must be received promptly however, anybody who hasn't sent payment by midnight UK time on Monday will regrettably be left off the group order.

On Tuesday the order will be officially closed and I'll send the artwork to the printers. Turnaround time from that point to orders going out the door is usually around 2 weeks, but I'll post updates here as I go along.

The 19th group order has now closed and the artwork has been sent through to the printers!

I'll update the thread again next week once the prints are in-hand.
Top 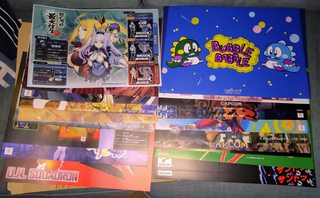 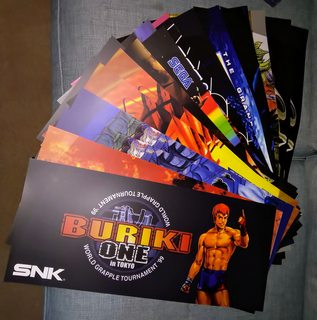 All orders have now shipped!

UK orders should only take a day or two, I would then expect orders within Europe to start turning up around the end of the week, but more likely into next week. Orders further afield will be next week at the absolute earliest, international orders typically take 2-3 weeks but sometimes can be as long as 5 weeks depending on destination, customs clearance and the speed of your domestic postal service once they have your package in their hands.

If anyone doesn't receive their order within the kind of time frames stated above, please let me know via MP.
Top

I mounted the new marquees ordered from you and they are looking great. Thanks

Waiting for the next group buy ...
Is there any chance of NeoGeo Mini Marquees too?
Top

Looking forward to the next group order as well! Subscribed so I won't miss it.

As always, please note that the closing date may be pushed back depending on interest level. Post any new design requests here in the thread and I will fill as many as I can before the order closes.

Please go to http://spectre.myartsonline.com to browse the catalogue of marquees!
Updated July 2018, 333 designs across 7 different formats! Please browse the last few pages of the thread for any new designs which I've not yet added to the catalogue.

I also have some marquees in stock, these are available for immediate dispatch or can be reserved now, ready to be sent with your order. See the stock list in post 3.
Last edited by Spectre on February 23rd, 2019, 9:26 pm, edited 1 time in total.
Top

I could print mini marquees in theory, but it would need to be a fairly significant number of pieces to do them for a sensible price...
Top

Could you whip up something closer to this for Deathsmiles (Blast City)? Dunno where the art for the second one is from, but the first one should be readily available on the Internet.

Hi there, can you do a Tekken 6 one for a Namco Noir.

Haven't done Noir marquees before but it should be an issue, looks like the holder is backlit and about the same size as the Lindbergh one. Can you give me the dimensions needed?
Top

Haven't done Noir marquees before but it should be an issue, looks like the holder is backlit and about the same size as the Lindbergh one. Can you give me the dimensions needed?

The header isn't backlit, light shines on the front of the marquee, the viewable size is 36cm x 76cm which if you look at the header is to the inside of the black band that runs around the whole header.

Can I request a Metal Slug 2 marquee for Uni/NNC/Blast?

Will order at least one or two others as well, just trying to narrow down my favorites.
Top

unGDLK wrote: ↑
January 28th, 2019, 7:25 MP
Could you whip up something closer to this for Deathsmiles (Blast City)? Dunno where the art for the second one is from, but the first one should be readily available on the Internet.

Zerrminator wrote: ↑
January 29th, 2019, 6:56 MP
I would like to request a New Net City repro marquee. It doesn't need to be chrome like the original, just somewhat close.

Can't find a scan for this one at the moment. Will have another look later as I remember seeing one once before...

unGDLK wrote: ↑
January 28th, 2019, 7:25 MP
Could you whip up something closer to this for Deathsmiles (Blast City)? Dunno where the art for the second one is from, but the first one should be readily available on the Internet.

Awesome. Is the black border visible or is it behind the "bezel" of the marquee (if you know what I mean)?
Top
Post Reply
1543 posts