Has anyone here by any chance modded their Namco arcade gun to work with a guncon2 for ps2?

I would love a time crisis cab or a point blank cab, but unfortunately, I just don't have the room or can afford one at present.

The next best thing is to mod my astro city to play ps2 namco light gun games!

I'm now in the process of trying to begin this mode, but before I worry about the solenoid, first things first is to "convert" the Namco gun for the PS2 using the gcon2 pcb!

Looking at the video, it seems pretty "easy" in terms of wiring up the +5v, GND, optical line and trigger line and the gcon2 works with the "namco" optical component without any "mods"

Sourced out a gcon2 Using the trusty multi meter, I found what I believe to be the trigger wire And what I believe is the Optical line Note, I have removed the optical sensor from the PCB I connected the following:
I'm not sure if there's anything else that I've missed, but for the life of me, I can't work out why the namco gun doesn't work. The video appears to show it should work seamlessly but when I try and calibrate the Namco gun on the PS2 (gcon2 calibration screen), nothing registers.

The PS2 definitely recognises the gcon2 and it did work prior to removing the shell and sensor.

I'm hoping someone on here has previously done this type of mod or is very familiar with the gcon.

Any ideas or suggestions?
Top

What a difference a few days makes!

When I first posted, I couldn't even get the gun to work with the guncon2 pcb, I then had challenges making the solenoid to work.

Fast forward a few days, I now have built the gun driver as per syntax's schematic and I have a rapid fire capable Namco gun with recoil for my ps2.

Very nice. How’s the accuracy after the mod?

Oohhhhh. I want it!
Top

Yes, there is a little interference in the optical sensor.

I'm yet to figure out where this interference is coming from.

I've been told I may possibly need a diode in between the sensor wire.. I'm not too fussed about it yet since my initial goal was to get the gun driver to work along with the pcb.

If not, I'll manage.
Top

How do you have that connected to your Astro? I spent a while trying to get guncon2s to work nicely on an E2 via a JammASD - which includes an RCA port for this purpose. It worked but it was jumpy like your video.

I have no idea what the problem was. I gave up. It may well have been something simple like dust.
Top

Looks to me the +5V you tap from the little board in the arcade gun is fluctuating cause the optical sensor issues.
Top

pubjoe wrote:How do you have that connected to your Astro? I spent a while trying to get guncon2s to work nicely on an E2 via a JammASD - which includes an RCA port for this purpose. It worked but it was jumpy like your video.

I have no idea what the problem was. I gave up. It may well have been something simple like dust.

My ps2 is connected to my astro city using Viletim's SCART to JAMMA pcb.

The scart cable I use has a guncon port specifically for light guns.

The interference is is definitely from the mod I've completed. The guncon2 was perfect prior to me modding, so it has to be me.

I just need to work out what occurred.


Asure wrote:Looks to me the +5V you tap from the little board in the arcade gun is fluctuating cause the optical sensor issues.

That's my thinking as well.

I've purchased an original Namco optical sensor to see if that'll make a difference since the optical sensor has a resistor on the gnd and +5v line..

I'll find out once I get my unit.

I did try it out on a few stages of time crisis, and I must say, once I get the intial calibration, it's not as bad as it shows on the screen.
Top

Last "progress" post of the Namco project... all the circuitry is now complete! (although if I press the trigger too fast on single shot mode, it fails to engage the recoil and causes it to misfire)

Switching between the two seems to work

Now I need to put it all in a nice little project box and also fix the jitter on calibration.

I tested time crisis 2 and it worked a treat after the initial calibration.
Top

So different from when I first made the mod.

I purchased a new Namco Optical sensor and the only difference is there's a capacitor in between the GND and +5v lines of the original namco optical sensor. My one with the interference doesn't have the capacitor - I originally removed it on the logic of "i'm only extending what was on the guncon2" not realising I required the cap. So I can now confirm I have a perfectly working Guncon2 on a Namco Arcade Gun with rapid and single fire recoil!

Massive shout out to Syntax for sharing the schematic - I don't think he's on these forums though.
Top

Great, now i'm sort of tempted to get a gun a some gun games now.. The recoil was the best in these arcade guns, even if home versions of Time Crisis were near perfect on ps1/ps2 the home guns were 'so-so just not it' w/o the recoil

(And nice to see i was right that the +5V was dirty, probably with some feedback from the optical.)
Top

Cleaned up the gun.. Unfortunately it didn't get rid of the discolouration Also cleaned up the solenoid by soaking it in degreaser. Problem I had was it was soaked overnight and as a result it corroded. Fortunately soaking in vinegar for a couple of hours removed the corrosion and I greased it up with some silicone grease and she came good!

To clean the build up, I ended up creating a project box to store the gun driver and guncon 2 pcb. The switch is on the side (to go rapid or single) This method makes the Namco gun totally stock as I simply unplug and she's set to to go back in an arcade cab. And of course, the end product with the first test on TC2 with the foot pedal.

Didn't realise how hard this game is compared to Time Crisis! Obviously the difference here is all about the rapid fire!

Whilst it's nowhere near the machine gun from the arcades, I will say this game is by far the most popular when people come over

(it's been in my want list for a VERY LONG time... now it's just daytona left to get!)

Unfortunately the cab game isn't working, it goes into a bootloop error

The solenoid coil, spring and spacers are also missing from the gun, the bracket is broken and wires have been cut so the gun was inoperable when I got the cab. 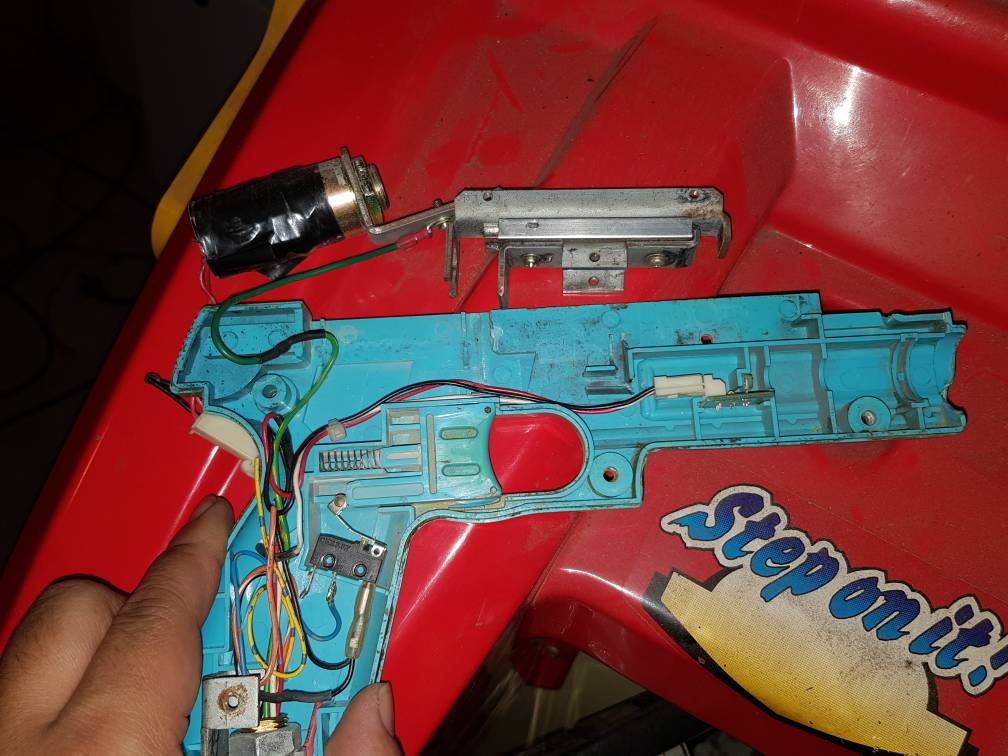 Purpose of the cab is to hopefully get the original game board working, but to get my PS2 Namco library working.

The solenoid on one gun is really weak and was used purely as a testing unit..

Gun 1 = my original gun I worked to get to get the guncon2 working with the Namco gun. Solenoid is perfect.

As you can see, the solenoid on gun 3 is shocking when it comes to rapid fire.

Enter Zax Amusements! One of their employees reached out and advised they hard parts I was wanting. Low and behold, they happened to have one solenoid left. It was a no brainier, I had to purchase to replace gun 3.

The package was received yesterday and I now have two brand new shells! 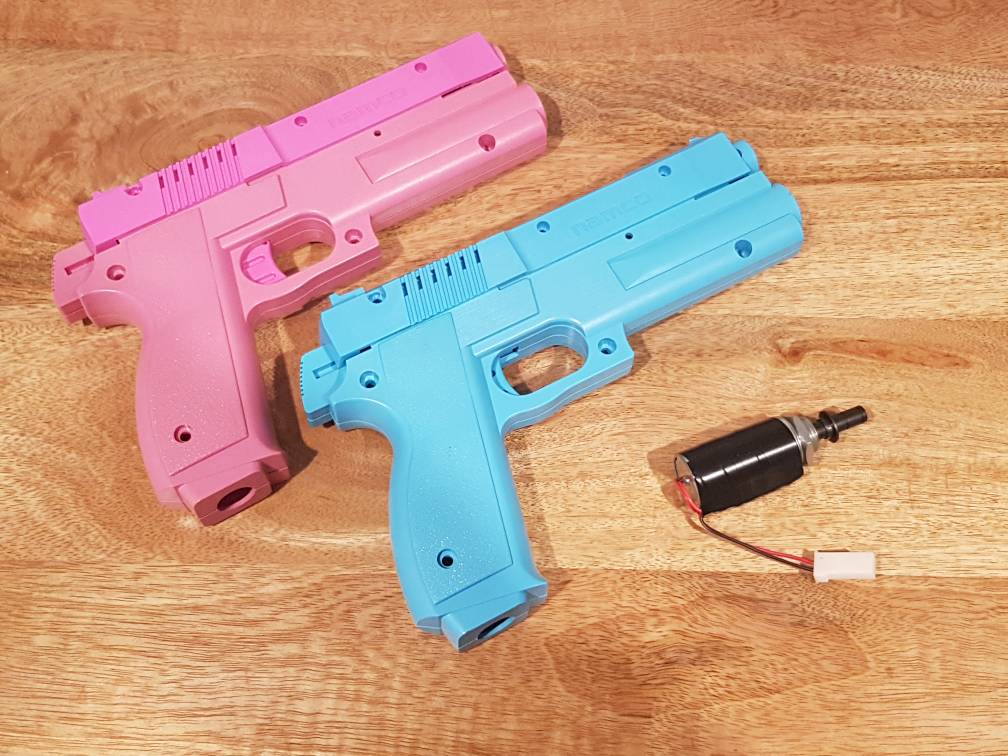 Working on the solenoids and wiring... 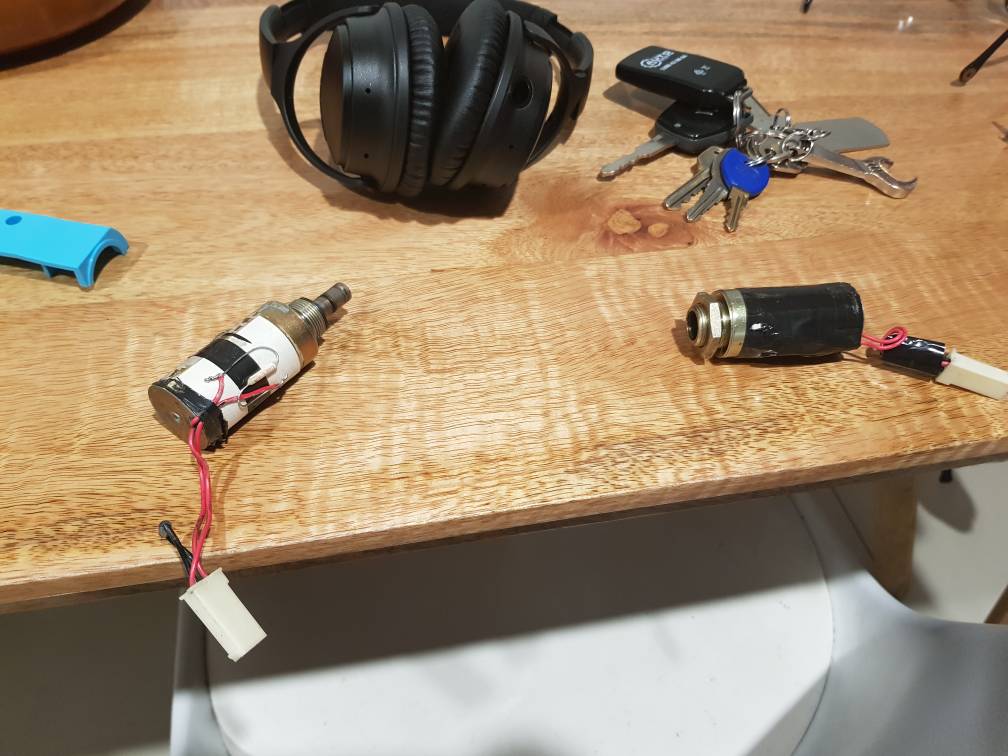 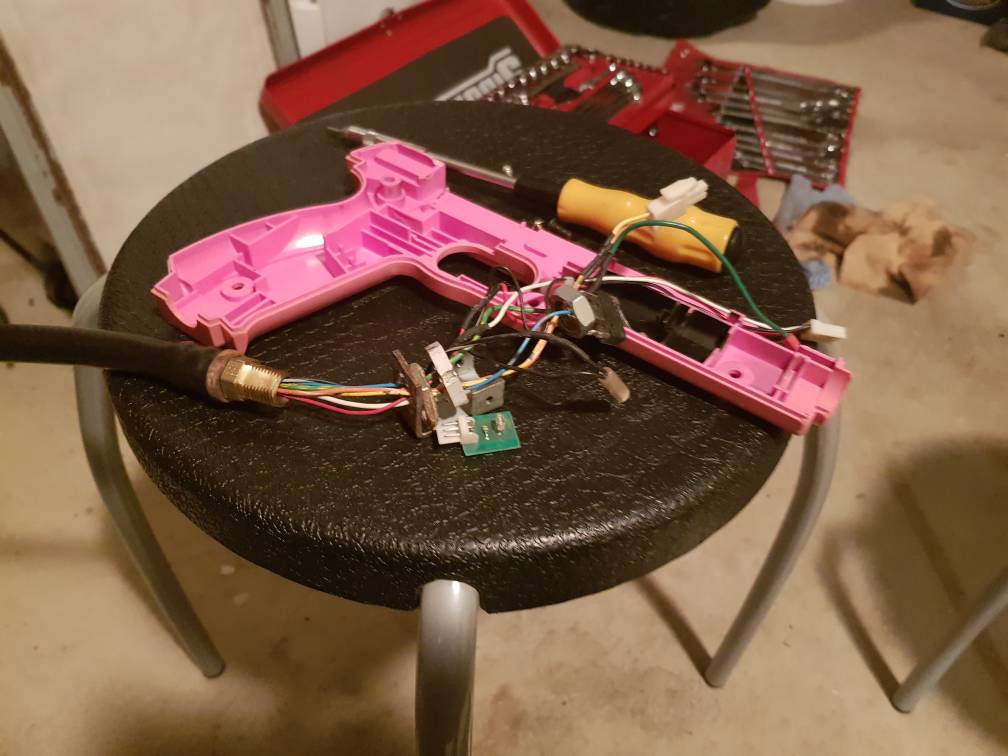 After cleaning and greasing the rails, replacing the solenoid and shell, the gun is pretty much brand spanking new and she fires so nice in rapid fire mode!

PS2 is working like a treat! I'm still very hopefully that the TC board set I purchased fixes the arcade board issue

Things left to do is:

- build a second gun driver for point blank action
- get the TC game board fixed (if the game board set i purchased doesn't fix my issue, I'll re evaluate to confirm if I want to fix or not)
- give the cab a complete clean
- continue to look for a complete Japanese topper
Top

the other thing which isnt clear to me is if you need to buy the namco sensor or not? .. can you just use whatevers in the original namco gun?

Finally got around to finishing the v2 design

It's not pretty, but she works!

The spaghetti of wires! 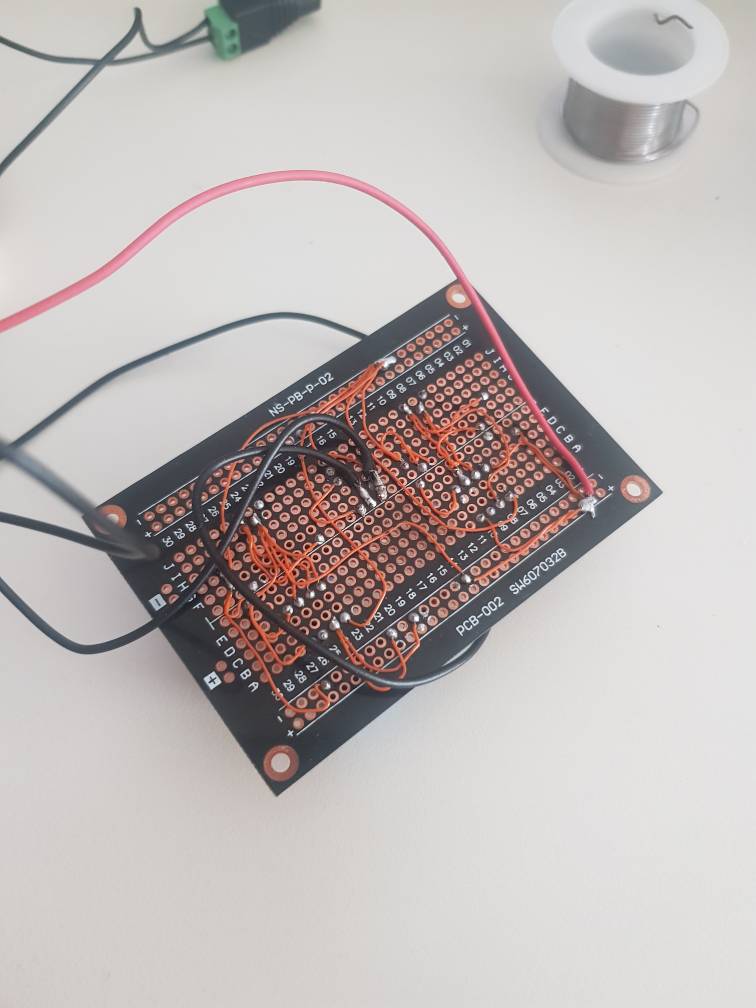 The top side doesn't look too bad 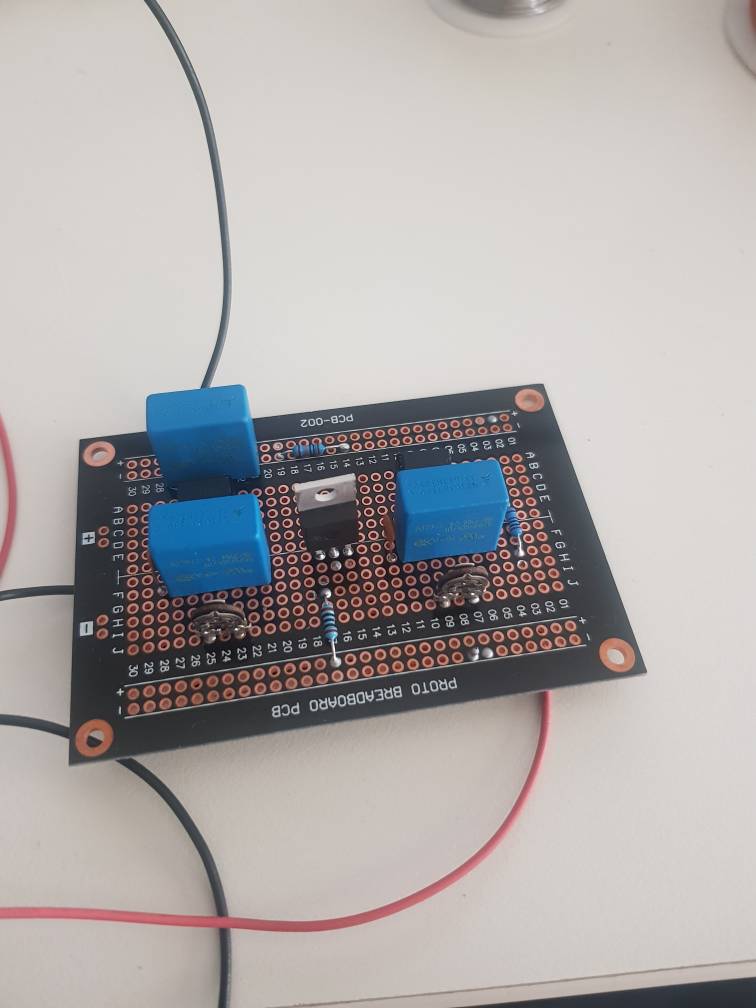 More wires! Now that it's tested, I'll try and clean it up in a project box and will attempt at making the pcbs swappable (will do a gcon and gcon2 mod, maybe at some point dc too) 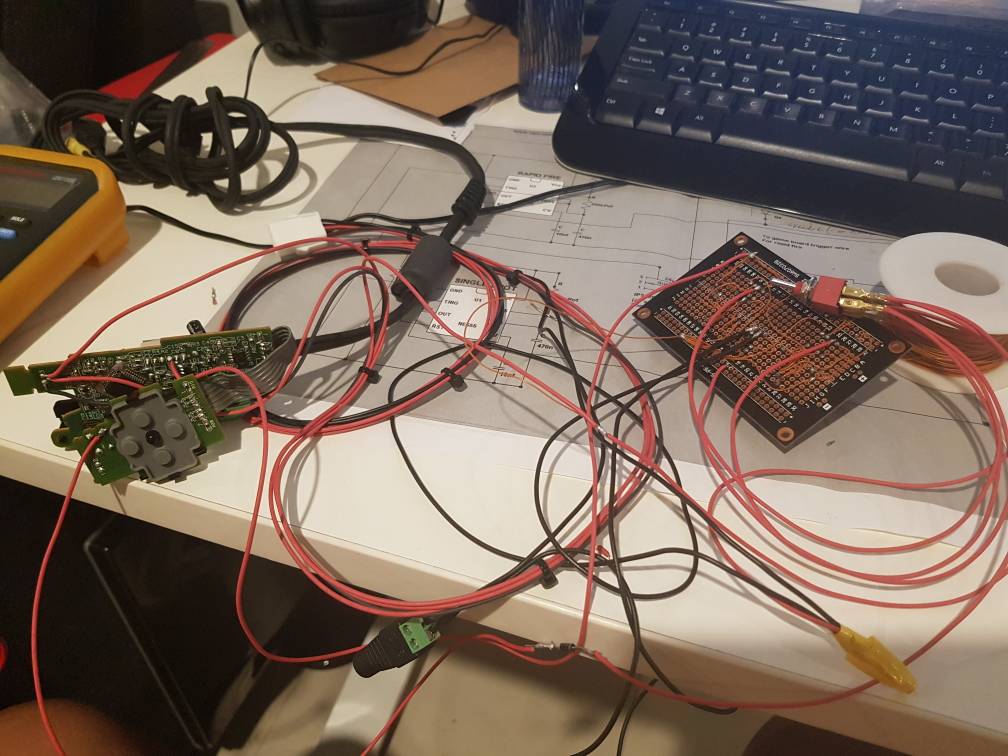 Video of it in action

A 5yo won't be able to complete this mod

Tbh, I don't know how I've completed it, considering I know nothing about electronics! But somehow, I managed to translate the schematics.

The v2 design is located here.


devtty0 wrote: ↑December 6th, 2018, 11:12 am the other thing which isnt clear to me is if you need to buy the namco sensor or not? .. can you just use whatevers in the original namco gun?

I just found a namco gun with solenoid but he is empty. I want to be able to use it on ps2 with the recoil. Can you help man? I am from france and i really want to be able to play with it at gun games like time crisis.
Please let me know if you can help me
Top
Post Reply
21 posts