Sounds like a place to start (I mentioned the fan issue earlier). I forgot what the inside of an early rev System 246, A or B, looks like. Rev C onwards combined both the Namco and PS2 boards into one. I'd replace the fan and clean/reseat the pcbs in that "bad" System 246 that was removed.

It won't even chime on the test bench, there's nothing to reseat aside from dongle and the ribbon connecting it to the board.
Random blog of stuff:
http://blog.system11.org
Top

leonardoliveira wrote: ↑
March 20th, 2019, 10:37 MP
The serial will be on test pads unfortunately there is no diagram for the arcade boards. There are diagrams for the regular PS2s, though.

I hope someone knows how to repair these. It's threads like this that make me concerned on emulation for any Namco System 2X6. I am not the best with this hardware but the OP seems to be a bit stubborn on the "condition" of these boards (never said if he even cleaned both boards or checked all the important components, chips, ram, etc). Edit: forgot the OP can only access one side at this time due to a bad lock. Good luck on that and tell us how the other System 246 rack is.

Had a similar story on a twin Time Crisis 2 I purchased. Both boards would boot fine but were covered in dust and grime when I first purchased that machine. I ended up cleaning all the boards, cages and fans to prevent issues like these (the infamous C404 error for example). This type of maintenance is especially the case with rare and/or fragile arcade hardware.
Top

Unfortunately it's nearly pointless trying to diagnose hardware this new, all custom, surface mount etc. I gave it a visual check, cleaned up a few bits of corrosion, but there's a chip which overhangs its own pins - I think possibly a BGA fitment, it sat right below the rusty fan and I think there's a fair chance there's corrosion under there since the outer body of a nearby capacitor is clearly corroded. A few tracks and pins on various surface mount customs are showing early signs of corrosion but checked out with a continuity test. The old power supply was worse inside, obvious corrosion affecting tracks under the PCB and various components.

The life of a seafront arcade cabinet unfortunately, at least the guns are perfect - I totally rebuilt them when it arrived as they'd been abused as usual, even the outer casings are new.
Random blog of stuff:
http://blog.system11.org
Top

Put a pic out

Depends on the hardware but I wouldn't even call it pointless. Sega Hikarus are far worse to diagnose due to the fragility of that hardware (those BGA custom chips that are a bit easy to break). While there has been some successful attempts at repair, BGA equipment costs a lot of money. In the case with rare arcade hardware that isn't known as much, diagnosis has to be the best option. Namco System (Super) 22s are another example of hardware that repairs of either power cycling or no 3d isn't completely understood afaik.


system11 wrote: ↑
March 21st, 2019, 10:43 MP
I gave it a visual check, cleaned up a few bits of corrosion, but there's a chip which overhangs its own pins - I think possibly a BGA fitment, it sat right below the rusty fan and I think there's a fair chance there's corrosion under there since the outer body of a nearby capacitor is clearly corroded.

I'm pretty sure the fans used in these Namco System 246s were ball bearing (imo the most effective if maintained correctly). A person on reddit explained the whole ball bearing fan wear and tear issue with a Time Crisis 2 once (C404 error). What happens is the fan over time shreds it's bearings and they blow tiny flecks of metal along with dust and dirt. Too much dust/dirt buildup can cause either insulation on some chips causing them to overheat or interference of some traces and contacts. I do not like BGA components especially in this case.
Top

Ball bearing fans have real ball bearings in them, I don't really see how these can shed metal bits.

Sleeve bearings on the other side is just a brass jacket which holds a vanadium coated axis which is lubricated with mineral oil and use rubber O-rings to keep it from vibrating. Real crappy stuff. I can imagine these shedding metal but not ball bearing ones.

These boards are suffering of marine corrosion, right?

That's my assumption - rust on the chip legs is only in a couple of places, but the fan area had a rust *pile* under it 3mm deep from the casing reacting to salt air (my assumption for the cause). Every air intake and outlet is like this on the power supply and board I've had access to so far.

I'm a bit nervous about drilling the other lock out - can't find my goggles. Last time I did one I ended up with a shard of drill bit stuck in my leg, can't see a single way to access it from the front by removing other parts though, it's all compartmentalised - in the upper half where the monitors are (I can access both of these) there's no corrosion further lending weight to the salt air flow theory.
Random blog of stuff:
http://blog.system11.org
Top

These boards are relatively easy to source, it might not be worth your time restore a board with such a high level of marine corrosion damage. You have the dongle and the media with the game data, use it with a new board.

Sleeve bearings on the other side is just a brass jacket which holds a vanadium coated axis which is lubricated with mineral oil and use rubber O-rings to keep it from vibrating. Real crappy stuff. I can imagine these shedding metal but not ball bearing ones.

These boards are suffering of marine corrosion, right?

I might have confused the two. Safe to say ball bearings are susceptible to wear and tear but the process is much slower than on the sleeve bearings as you mentioned. Correct me if I'm wrong on this. The original factory fans for a Time Crisis 2 (or nearly any Namco System 23) pcb rack may have used sleeve bearing fans most likely for cost reduction. It's probably safe to say the fans on my Time Crisis 2 were replaced at one point and need to determine if they are ball or sleeve bearing.

EDIT: The current fans installed on my Time Crisis 2 are ball bearing. I'm glad they are still holding up.
Last edited by Hydreigon on March 26th, 2019, 8:45 pm, edited 1 time in total.
Top 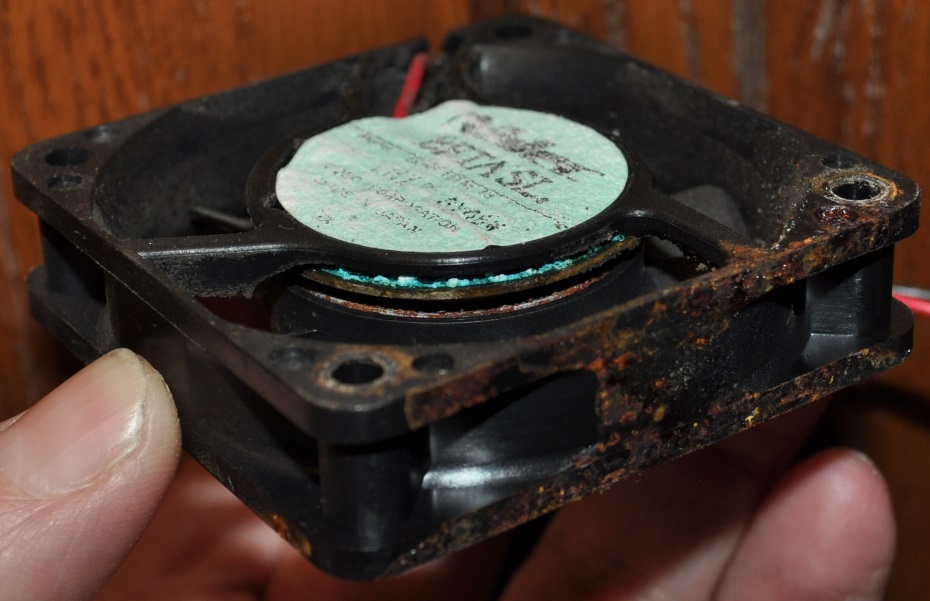 Enjoy rusty fan, this one from the CPU box.
Random blog of stuff:
http://blog.system11.org
Top

Enjoy rusty fan, this one from the CPU box.

That's a Nidec BETA SL fan. It's ball bearing and very high quality one, while at it. Look how blue the copper in the board has became. It's completely destroyed by marine corrosion.

If the fan is in that state, imagine the grime under the BGA chips. I would wash the board out to deter further corrosion and keep it for parts. Not really worth your hassle at repairing.

So the 2x full sets and 2x motherboards arrived from Hong Kong - they have LG consumer drives in them, not screwed together properly either leading to grounding issues on the display. HOWEVER - I just unwrapped one of them, plugged it in and the game booted straight up. Test menu complaining about a flat battery, easy enough to deal with. I'll probably swap the original drives into these ones since there's no reason to believe they weren't working (the one I pulled certainly ejects and reads the disk on insertion), and screw everything together properly.

Only thing standing between me and a fully working machine now is a lock that needs drilling. I fully expect to find the same corrosion nightmares in that side too.

And all it took was replacing everything.

Edit - no, they are correct drives after all and just a few screws were loose. They're damn near perfect inside, not looking forward to rebuilding the old ones with the new boards, there's a LOT of rust removal to do, it's going to take a dremel with a really aggressive abrasive bit to cut through. I tried the wire brush attachment and it barely made a difference.
Random blog of stuff:
http://blog.system11.org
Top
Post Reply
32 posts