There are 4 true KOV games.


2. KOV2 (2000), KOV2 Nine Dragons (2001) and KOV2 New Legend (2008)
As the title suggests KOV2 is the 2nd completely new game in the series, KOV2ND is a expanded version of KOV2 and KOV2NL is only on PGM2 hardware. 9 selectable characters and 3 game modes it's more of the tweaked, updated, expanded, remixed shenanigans of the two KOV2 games.
Differences between KOV2 and KOV2ND: KOV2 has 5 selectable characters and a further 4 unlockable, KOV2ND has 14 with a further 4 unlockable. The new characters are not only palette swaps they also have their own unique moves. KOV2 has 4 Difficulty levels available in the service menu, easy, normal, hard and hardest, KOV2ND has 6, very easy, easy, normal, hard, hardest and very hard. KOV2ND has 4 modes E Mode: Beginner, 9 characters and only three stages long. N Mode: Standard. 14 characters play and the set of levels. R Mode: Expert ranking mode – Same as N Mode but harder. C Mode: Boss rush. Fight 8 bosses or 16 if 3 or 4 players are playing simultaneously. Check out Shinju Forest for more info http://shinjuforest.blogspot.co.uk/2013 ... agons.html


3. KOV3 (2011 on PGM2 & 2012 on PGM3)
This is the 3rd game in the series. More of the same ace gameplay but IGS introduced a timer system. It's on PGM2 & PGM3 hardware.
Differences between KOV3 on PGM2 and PGM3: I believe both are the same game but it's in HD on PGM3 hardware. The PGM3 version is the only KOV game in the series that I don't own so just to point out there could be other differences. Check out Shinju Forest again for some info on the PGM2 release http://shinjuforest.blogspot.co.uk/2013 ... ch-results


4. KOV The Seven Spirits (2003)
This is on Atomiswave hardware and it's another nice KOV game which is a little different.
Choose from 6 selectable characters
2.5D (2D sprites with 3D backgrounds)
1 or 2 players only (PGM titles were upto 4 player)

Check out youtube and compare titles for yourself https://www.youtube.com/results?search_ ... s+of+valor

I've added a couple more bits but if I think of or read anything new then I'll update the post.
My arcade tat

Quick question: I have a PGM cart (knights of valour) which has a P0600 chip on version 104. I noticed there is a MAME set having version 117. Can I just burn an EPROM and replace the original chip to update my cart to latest version? if so, which EPROM would it be?

Quick question: I have a PGM cart (knights of valour) which has a P0600 chip on version 104. I noticed there is a MAME set having version 117. Can I just burn an EPROM and replace the original chip to update my cart to latest version? if so, which EPROM would it be?

If it is a different region game, then no.
PCB Collection
Top

Do anyone own a martial masters as pcb version? Does it really exist? Anyone has a photo of the pcb? Thanks.
Top

Hey guys, I signed up just for this thread and to clear up some confusion surrounding the PGM and regions/updates.

In terms of updates to newer versions I haven't had a problem burning any new P ROMs and using those. This applies only to newer versions of the same game, for example v104 to v110 or something like that. It doesn't allow you to change a KoV into a KoV Plus.

In terms of regions, it appears that most games lock the region to the ARM chip. The P ROMs contain all versions of text. The only publicly available hack I'm aware of is an English hack for KOV2ND that changes a handful of bytes around to force English. So far the only game I've been able to get into English with a simple P ROM swap is Dragon World 2 using the v110 ROM that is commonly found on the Internet. This also changes the tiles around to cartoonish icons rather than the more traditional mahjong style tiles.

The same region situation applies to the PGM2, with the exception of KOF98UM which has language selectable via the test menu. KoV2 and OL2 are available in English versions, KoV3 is Chinese only.

Hopefully this clears up some of the misinformation I've seen around the net regarding the PGM. This is all practical experience w/these games and not just second hand information I heard or read elsewhere.
Top

Can anyone help me with an odd PGM problem please?

I've got a Ketsui conversion cart that resets whenever I insert a coin! No other PCB I own has this problem, and there's no fault with the coin mech - seems to be exclusive to the PGM setup. Sadly I don't have another PGM cart to check against, so can't confirm if it's the cart or mobo.

If it makes any difference, the cart has a switch to swap between original / arrange Ketsui versions. Problem is present regardless of switch position or DIP changes. Test menu shows everything working as fine - it doesn't reset when I put in coins during test menu, and records credits no problem. Note, reset only happens when a coin is inserted, not just when a credit is added - I can safely add credits using the test switch with no reset!

As some of you may have seen I sold a Demon Front cart here a few weeks back. The cart is to my knowledge original and has never given me any problems. The new owner on the other hand cannot get it to run. For him it boots to the dreaded green screen

He's got a Ketsui conv that runs fine on the same mobo.

Any help on this would be greatly appreciated.
New Astro City - Bits and pieces about candy cabs, arcade games and such
My stash on the wiki
Top

I've had this problem, and it was a faulty mobo. It runs Ketsui and DOJ BL conversions and Bee Storm no problem, but would not run Demon Front or Knights of Valor.

IIRC it showed up as a RAM error on the test menu, but only when there was no cart inserted. I think I got a game-specific test menu when a non-working cart was inserted and that didn't report a RAM error, so I missed this the first time.
Top

Got the same input from Monouchi. In his case the conversions ran fine, but not BeeStorm IIRC.
New Astro City - Bits and pieces about candy cabs, arcade games and such
My stash on the wiki
Top

Got the same input from Monouchi. In his case the conversions ran fine, but not BeeStorm IIRC.

Does the IGS PGM run fine in a New Astro City?

Also a few threads back someone asked if there is a dip setting to flip the screen. Which leads me to ask, which way does the monitor need to be tated to play the vertical games? I have Ibara in my NAC right now and wondering if Id have to flip my monitor 180 degrees the other way to test out one of the vertical shmups on the PGM.
Wanted: Vewlix L 1p control panel
Top

No need to flip your monitor just unplug Ibara then plug in your PGM, you may need to adjust the +5 as per usual when swapping out games.
My arcade tat

Anyone else here get more enjoyment out of Oriental Legend than the KOV games? I had KOV super heroes and KOV2 Nine Dragons. After a while they just felt repetitive to me, and were such long games to finish. I liked to use the "flying Jesus" character as I called him. I ended up selling those and kept Oriental Legend. Why say me? Well.. the game is simply just a ton of fun. It's like a giant acid trip from beginning to end. Everything is just complete nonsense on screen and you never know what to expect next or what ridiculous boss you have to face. I also like the craptacular graphics and feel it gives it a certain charm. I wish they made more games in this vein. A 4-player game of this with some friends would be absolute seizure inducing insanity.

I do like pretty games too mind you, and I will not sell my copy of The Gladiator.

Just look at this guy. What is he supposed to be? Just glorious! 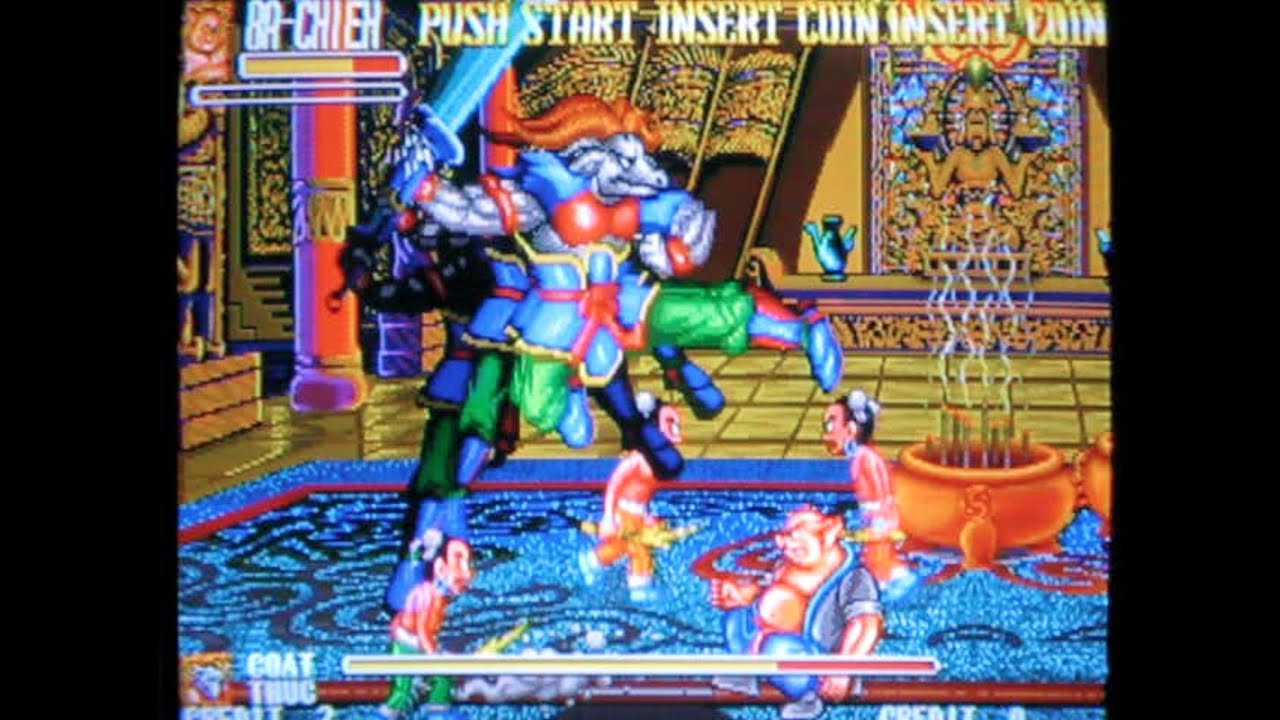 Ive tried Oriental legends a few times in MAME, but i just cant get over the horrible character sprites in the game, so have never looked to buy it

I do have KOV, KOV Superheroes, and a few weeks ago finally picked up a Gladiators which ive wanted for aaaaaages